I just upgraded my Ubuntu from 12.10 to 13.04 (now that I have a good internet connection) and I did find the desktop to be more responsive than before. The file browser seemed to be working faster, applications seemed to be launching faster and even my laptop seemed to be running a tad cooler !
I thought I'd push my luck a little and try installing the nVidia proprietary driver for my GT 630M that I had been trying to install since the December of last year. Bad move. I was left with a terminal screen and no GUI. The nVidia install script had altered my current display manager config in ways I did not know how to repair (I couldn't find all the files that had been altered). 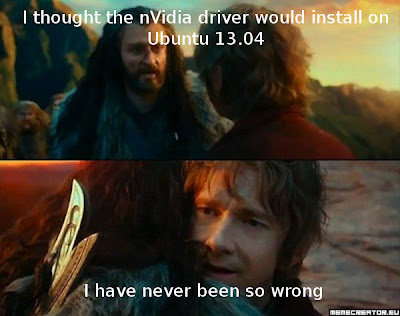 I don't know much about hardware but from what I could understand of what was written online, the way laptops with nVidia Optimus technology work is that they direct all traffic through the in-built Intel graphics card (in my case the Intel HD 3000). If this load is detected (somehow) to be too much for the Intel card to handle, it calls upon the dedicated graphics card (enter nVidia) by redirecting the data to be processed to it. Now the major problem with this setup is that operating systems like my dear Ubuntu-Linux refused to detect the dedicated graphics card all together and hence all my attempts to install the nVidia drivers failed miserably. Let me pause for a second - I wanted a GUI before experimenting any further and so I thought I would sort out the Unity issue first before proceeding with the graphics card issue.

Taking my brother's advice I decided to scrap Unity in favour of GNOME 3.8 and lightdm in favour of gdm. So I removed Unity and installed GNOME 3.8 by getting the packages from their repository.


Done ! GNOME 3.8 installed and running. It was the bare minimum with no addons but it would do for now. The only remaining task was to get my nVidia card to work.


After searching around for a while I found a project called Bumblebee which aims to provide an Optimus-like solution for users running Linux distros on laptops with i3 / i5 / i7 processors and nVidia graphics cards. The main aim of the project is to help with discrete nVidia graphics power management on Linux the way Optimus works on Windows.
You can find out more about the Bumblebee project here : http://bumblebee-project.org/
I followed the installation instructions provided for Ubuntu here - http://bumblebee-project.org/install.html and hurray ! My nVidia card now works on Ubuntu ! Plus my battery life while running Linux has improved tremendously. I am now getting over 4.5 hours on full charge (as opposed to the short 1.5 - 2 hours that I used to get before Bumblebee & GNOME 3).

I am just hoping that I don't end up with a terminal screen and no GUI anytime soon !